Last year, prior to going to Jonathan Snook ‘s inaugural SMACSS workshop in Ottawa, Canada, I was thinking. There was something that I was on my mind for the past year. Then, [place lightning description here], I got inspiration from looking at some of my old linear algebra books from college.

What did I do next? I announced it on Twitter:

I spent whatever free time, post-workshop, working on this in my [first] Moleskine notebook. The early sketches look more like algebra proofs that the visual model that exists today. 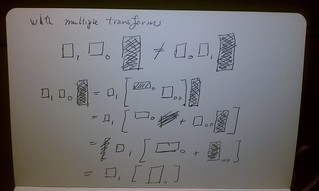 However, these sketches and some rules that I wrote down became the basis of the project’s First Draft.

And as they say the rest is history.

Though currently on hiatus, I am planning a few more sketches and notes in the current year.

Hopefully, this project will still be around for year two.